ESF: How to Properly Lock Out the Deadlift – Part 1

Exercise Science Friday: How to Properly Lock Out the Deadlift – Part 1

The deadlift shares the spotlight with the squat as King of Exercises. The popularity of Crossfit has introduced the deadlift to many new people, which is excellent. Unfortunately, many people deadlift incorrectly and run the risk of developing lower back pain as a result.

This article will focus on locking out the deadlift properly. I’ll explain correct form, highlight examples of incorrect form, and provide coaching cues to fix your lockout. In Part 2, I’ll feature exercises, drills, and techniques to cement your new and improved lockout.

Here’s an example of an incorrectly locked out deadlift, courtesy of a quick Google image search for deadlifts: 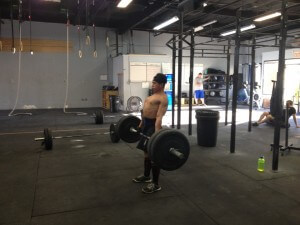 Looks OK at first, right? Nope! The problem is his lockout: he’s using his lower back to finish instead of his glutes..

When I began coaching professionally, I began working in a local “big box gym” that also had a popular Crossfit program. I quickly developed a niche in the “traditional” part of the gym as the “post-rehab guy”. If you need to train around an injury or transition back to lifting after physical therapy, I’m your man.

A large part of what I do is simple injury prevention: creating “structural balance” by improving posture, core stability, and balancing strength through the body. I coach mostly healthy clients and athletes, but with a focus on proper form and “qualifying” people for exercises.

Both at that gym and in the years since, I’ve worked with plenty of clients with stubborn back pain and poor deadlift form. In each case, they locked the deadlift out with their lower back muscles instead of their glutes. The worst cases were unable to use their glutes even on bodyweight exercises.

Now, this doesn’t mean you’re weak. And your spine won’t snap in half and shoot across the room when you do this. Plenty of people get strong doing this. It’s just not ideal and can lead to poor performance and overuse injuries down the line. It’s very common and is often the result of bad (we’ll say well-intentioned yet misinformed) coaching.

There are a few problems here:

1 – They were often weaker than they should be. Not being able to use their glutes severely limited their strength and left pounds off the bar. They should have been able to deadlift more than they could. As a result of learning correct form, each client set new personal records on their deadlift.

2 – They often had lower back pain or hamstring injuries caused by muscle imbalances. This is a classic example of Janda’s Lower Crossed syndrome, as referenced in the diagram below. 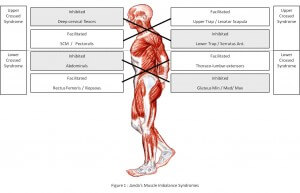 3 – They struggled with several other exercises, to include: overhead pressing, squatting, lunging, and running. Their muscle imbalances made them inefficient, stiff, and seemingly inflexible.

Many of the clients I’ve worked with have reduced or eliminated achy lower back pain simply by learning the correct form for the deadlift. This usually involves teaching them how to lockout correctly by using the glutes instead of the lower back. Combined with exercises to strengthen their glutes and abs, they usually saw increased strength and performance while they moved and felt much better.

(Note: if you have back pain, get evaluated by a physical therapist. Don’t attempt to self-diagnose or self-treat and definitely do not rely on my writing. All of my clients with existing pain are medically cleared by a doctor and/or physical therapist before working with me.)

Simply put: don’t drag the bar up your legs and then shove your hips forward to finish. You need to explode with your glutes once the bar passes your knees. Pull the hips up, don’t push forward.

Wolverine doesn’t lean back when he locks out his deadlifts. Neither should you.

Even Blackbeard does dead lifts. Training with @davidkingsbury #180kgs #PAN

Extension-Based Back Pain in a Nutshell:

Watch this example of a purposely bad deadlift from coach Lee Boyce:

Look at 0:11. The chest is out – too far out. Ribs are up, the lower back is hyperextended, and the shoulders are behind the hips. It’s a subtle lean back, but this is what you’re looking for in a lousy lockout.

Many overuse injuries in the gym are caused by poor form over a long period of time. It’s rare that it’s a single awful deadlift. If it was, it’s more likely to be an acute injury (like a herniation) than an overuse injury. The simple explanation is this: deadlifting with a lousy lockout causes you to overdevelop your lower back (spinal erectors) while underdeveloping your glutes.

The constant overdevelopment leads to the spinal erectors essentially taking over the role of the glutes: hip extension. Now that you’re using your lower back muscles instead of your glute muscles, you begin to move your spine incorrectly, possibly damaging the vertebrae and discs. As the lower back muscles overdevelop, they become stiff but also quite frequently sore, tense, and painful.

Here’s the example of the Bad Deadlift that I featured in the introduction:

Perfect example of a hyperextended lockout that could be deceiving.

Ribs are up and he’s leaning REALLY far back. This means that the lower back is hyperextended and in a compromised position. Again – the chest is too far out and the shoulders are behind the body.

(The exception is thoracic kyphosis, as seen in roundback deadlifting or Atlas stone lifting. However, this movement occurs in a different section of the spine. The rules are also bent during maximal efforts, but this should primarily occur in powerlifting competitions and similar events. Powerlifters do what lets them move the most weight, not what is necessarily the safest.)

When I see a lousy deadlift, the person performing it explains it to me like this:

“I bring the bar to my knees, and then I just shove my hips forward like THIS.”

In the process, they arch their back hard at the top. Or, they lean back until the bar appears to be locked out. In both cases, they are not using their glutes. Remember, the glutes are large, powerful muscles that are responsible for generating force, speed, and power in their lower body.

Not training them to their full potential leaves you slower, smaller, and weaker while possibly increasing your risk of injury in the gym. (And it makes your butt look flat)

Luckily for me, deadlift coach extraordinaire Tony Gentilcore has filmed an exaggerated example of a lousy lockout:

There are a few key things to watch:

Compare that example to the correct lockout:

(For more from Tony, sign up for his newsletter at www.tonygentilcore.com where he has a free e-book on deadlifting.)

Deadlift Cues for a Great Lockout

Why it’s a bad cue: Shoving the hips forward usually means lumbar hyperextension. Pulling up on your knees, like in a russian kettlebell swing, can help you to use your glutes.

Alternative: Push the floor away from you.

Why it’s a bad cue: Squeezing your glutes is an internal cue. It’s something you do to or with your body. If you don’t know where or what your glutes are, it’s confusing. Many people will activate their erectors instead of their glutes when given this cue.

Standing up is much easier to understand. As you become more experienced, use more internal cues like squeeze your glutes.

Why it’s a bad cue: Arching means different things to different people. We want a flat back – not arched, not flexed. Arching usually causes people to lift their ribs up, rather than keeping them down with the core engaged to resist lumbar extension. Instead, use coach Eric Cressey’s cue: “Show me your t-shirt.”

This creates the chest up, ribs down position that we want throughout the deadlift. Keeping the ribs down prevents the lower back from arching. To teach this, I recommend mastering Back to Wall Shoulder Raises as part of a warm up or daily mobility practice.

Eric Cressey coaches the Back to Wall Shoulder Raise (Flexion) in the video below:

(Eric also has a great deadlift tutorial and fitness newsletter at his site, www.ericcressey.com)

That’s it for today. I explained the difference between a good and a bad lockout, explained why bad lockouts are risky, and gave examples of each.

Subscribe to my newsletter by clicking here to make sure that you don’t miss part 2.